The Malaysian regulating authority emphasizes the importance of the measures aimed to ensure that any and all medical devices allowed to be marketed and used in Malaysia are compliant with the applicable safety and performance requirements.

According to the applicable regulation, the entities responsible for medical devices should perform monitoring necessary to ensure the safety and correct performance of the devices.

In order to assist medical device manufacturers, their authorized representatives, exporters, and other parties involved in operations with medical devices in maintaining compliance with applicable requirements, the MDA issued two guidance documents, dedicated to complaints handling and mandatory problem reporting.

One of the two guidance documents published by the MDA covers all aspects related to complaints handling.

The MDA guidance provides the definitions of the most important terms related to the sphere, namely:

The document also describes in detail the requirements manufacturers shall fulfill in order to be allowed to place their device on the market. In particular, the MDA states that the medical device manufacturer or its authorized representative shall provide the potential users of the device with the information regarding the way the complaints could be submitted, including the sample of complaint form and instructions regarding the submission process.

All establishments responsible for medical devices shall create an efficient complaint handling system, that should include the following key elements: 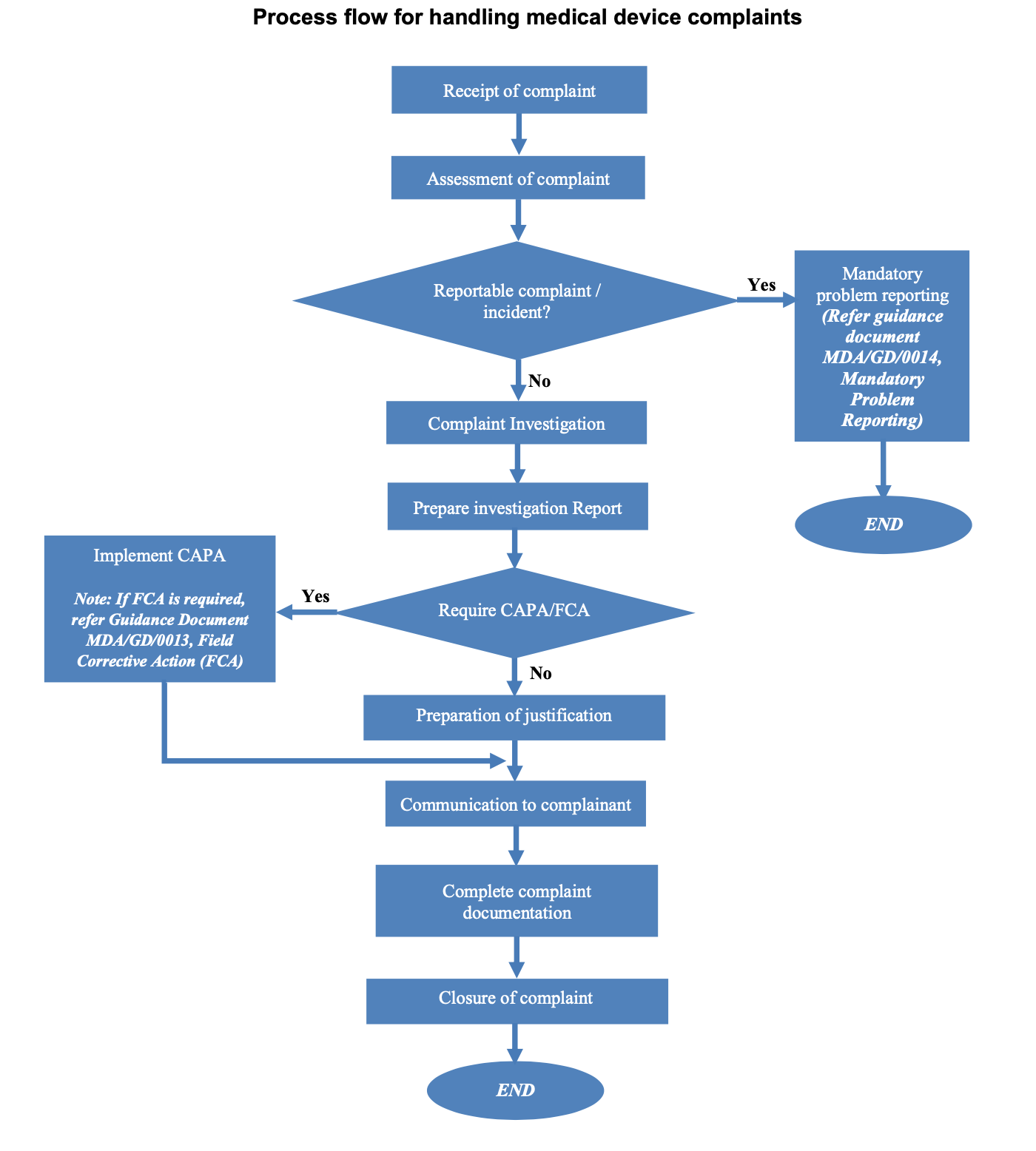 The primary mode of action of thermotherapy devices is based on the tissue-damaging temperatures generated by the device. It is important to ensure that the device operates without significant heating of non-target tissues. This aspect could not be fully evaluated through bench testing due to the impact of the multiple characteristics of the human organism. Animal studies could provide sponsors with important information related to the actual performance of the device when used for the intended purpose, allowing to evaluate the safety aspects. In particular, such studies are important in the case of thermal field-producing medical devices with not localized heating, or for entirely new medical devices based on the novel principles of operations.

Thus, the FDA recommends medical device manufacturers carry out the in vivo animal studies that are necessary to perform the thermal mapping. During such studies, it is necessary to create records of time-temperature history. The FDA also emphasizes the importance of taking into account certain differences existing between human and animal anatomy. In particular, this should be considered when placing temperature sensors or capturing the whole image.

In order to achieve accurate and relevant study results, the entity conducting the study should use the device in question in the same way it would be used when treating humans. Such an approach should be also used when choosing the operating parameters. The testing should cover all available modes and settings. For instance, the FDA recommends the following:

The FDA also recommends evaluating and providing information regarding the history of changes and the way the thermal effects created by the medical device are impacting the human organism.

If stents are present, the importance of human studies actually depends on the design of the medical device in question, its composition, materials used, the primary mode of action, the period of time the device is intended to be used, and also on the novelty of the device. The protocol of the animal study should be as close, as possible, to the actual method of application of the device subject to testing as intended by the manufacturer for BHP treatment.

According to FDA guidance, in the case of stents, the study should cover the following aspects:

If the device is intended to resorb, this should also be evaluated in the course of the assessment. In particular, the sponsor of the study should duly keep records covering several steps of degradation.

The entity shall keep all records regarding the actions taken to investigate the complaint and to address the issue. It is important to mention that all complaints received in oral form should be also documented. Such records should be kept for five years, or even longer if it is required due to the longer lifecycle of the device.

Thus, the MDA guidance on complaint handling describes the way the establishment responsible for the medical device should process the complaints received from healthcare professionals and patients using the device.

The second guidance document issued by the MDA is dedicated to mandatory problem reporting. According to the guidance, mandatory problem reporting is an important element of the post-marketing responsibilities of the medical device manufacturer or its authorized representative, and it is a Malaysian national equivalent of the adverse event reporting concept set forth under the ASEAN Medical Device Directive (AMDD). According to the mandatory problem reporting rules, the establishment responsible for medical devices placed on the market in Malaysia shall duly notify the regulating authority about any and all adverse events associated with the use of the device. In such cases, these entities are also obliged to carry out a rigorous investigation aimed at the identification of the roots for issues, and taking actions to eliminate the actual or potential consequences and hazard associated thereto.

The document also provides the definitions of the most important terms used in the context of the mandatory problem reporting, namely:

The MDA guidance on mandatory problem reporting describes the way the establishment responsible for medical device (the manufacturer or its authorized representative, in case of the foreign manufacturer) shall act in case of any issues associated with the use of the device for the intended purpose. In particular, the establishment shall provide the authority with the detailed investigation report, while the authority will evaluate whether the report is sufficient and make a decision regarding the possibility to close the matter.

The MDA also mentions that in case of incidents occurred outside of Malaysia, it would be sufficient to notify the local medical device regulating authority, while the corrective actions to be taken to eliminate the grounds for the issue should take place in all countries where the medical device in question is available.

The document also highlights the most important points related to mandatory problem reporting. In particular, when performing its obligations, the establishment shall consider the following:

When determining the necessity of reporting, the establishment shall consider the following criteria:

It is also important to mention that mandatory problem reporting rules to be applied in the case of in vitro diagnostic medical devices are a bit different due to the nature of this type of medical device. Under the general rule, the concept of indirect harm should be applied.

Thus, the MDA guidance on mandatory problem reporting describes the way the medical device manufacturer should determine whether the particular incident should be reported to the authority, and also the way such reporting should be performed.